A Message to Moms: Don't Treat The Ugly Twin Like Shit

For most tweens, braces are a metallic kiss of death. Sure, you're sacrificing two years of being able to chew gum for a mouthful of sheer white gold for the rest of your life (at least that's what your orthodontist says), but to a tween (I already hate that word), two years is an ETERNITY.

As if having a mouth full of metal isn’t bad enough (goodbye, taffy), imagine having an identical twin sister that your mom decided was too good for braces, and instead opted for the “invisible” Invisalign clear braces.

An early nominee for worst TV Mom of 2012, the Invisalign mom never even sees the screen. Instead, her evil handiwork speaks for itself through the mangled mouths of her twin daughters.

Throughout the commercial, the ‘braced’ daughter frowns heavily as she discusses all the things she has to do because of her braces: skip popcorn (even though she’s holding a GIANT bowl of it, which seems especially cruel), wear headgear that may act as boy repellant, and generally get made fun of by most of her peers--not to mention that newfound lisp.

All the while, the Invisalign sister laughs at the misfortune of her twin, presumably along with the cackles her mother emits every time she sees her normal daughter compared to her freak daughter.

What kind of weird psychological bullshit is she trying to pull with these kids? Is she trying to get them to kill one another? At the very least, they'll resent each other (probably culminating in Braceface sleeping with Invisalign's boyfriend somewhere down the line). What other kind of maltreatment is Braceface subject to?

I get the feeling that while the Invisalign daughter eats filet mingon and sips it down with all the sugar-water she can find (another danger to braces), Braceface merely sits in her room (aka the cellar), waiting for her bowl of slop to be slid under the door.

While the rest of the family cheerily poses for family photos, Braceface is at home, alone, looking up corn on the cob removers on pamperedchef.com. 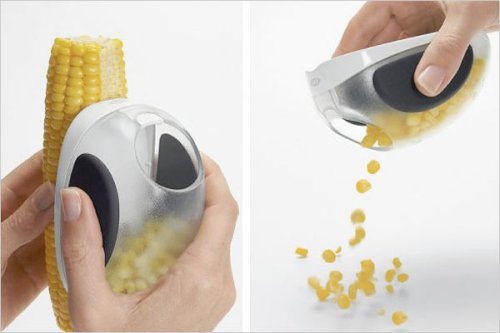 Yeah. It's a real thing.

While I understand the point the commercial is trying to make—that you can avoid the hassles of braces by choosing Invisalign, what I don’t understand is how they could possibly think THIS was a good idea.

It’s one thing to prefer one daughter over the other; I mean, I’m sure my parents loved me a lot more than my sisters (just kidding, mom) but they were never this overt with it.

This is some evil stepmother shit, a long-term attack on the self-esteem of her least favorite daughter. Sinister.

When the general consensus of a YouTube comments section is actually the clear-headed voice of reason, you know there’s something seriously wrong. So let this be a lesson to all parents: when picking favorites, keep it subtle.